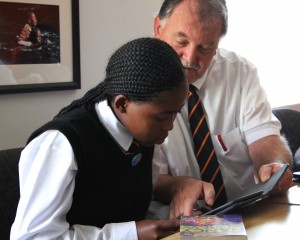 John Gilmour is the founder of the LEAP Science and Maths Schools and co-founder of Bridge and the South African Extraordinary Schools Coalition.

John attended Wynberg Boys High School and obtained a Bachelor of Arts degree from the University of Cape Town. He taught English and Geography and was a student guidance counsellor at Bergvliet High School and Pinelands High School, before being appointed as Principal at Abbott’s College for five years.

After many years of involvement in the community, John opened the first LEAP Science and Maths School serving the township community of Langa in 2004. LEAP is a leading learning organisation which aims to give young South Africans the academic and life skills they need to become future leaders. LEAP now consists of six, no-fee, independent high schools serving students living in the township communities of Langa and Gugulethu in the Western Cape, Alexandra, Diepsloot and Ga-Rankuwa in Gauteng and Jane Furse in Limpopo. LEAP also includes a teacher training programme, an after-hours community-based maths tutoring programme and a social development programme. John now serves as the Executive Director of the LEAP Science and Maths Schools.

In collaboration with other leaders in education, John co-founded The South African Extraordinary Schools Coalition. The Coalition represents a collection of intervention-based independent and public schools and organisations committed to transforming the lives of socio-economically vulnerable children.

John serves on the Teach with Africa, Edunova and REALISTIC boards and is an active participant on the Advisory Committee to the Historic Schools Restoration Project.

LEAP shares its stories and model to create a new voice in youth leadership, proving its impact so that it can grow to reach more young people.