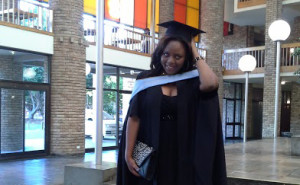 Nomaza went to Zimasa, a public school in the community of Langa where she was born. Langa is one of the oldest townships of Cape Town plagued with gangs, drugs and high levels of poverty and teenage pregnancy. She started grade 10 in 2006 at LEAP and matriculated in 2008. She describes her LEAP journey as helping her realise that she had a purpose in life. Nomaza knew that she had to lead a different life and found a home at LEAP, an environment that allowed her to realise her full potential.

“LEAP has helped me realise that I’ve got a purpose in life. It has equipped me with life-long learning skills. LEAP taught me independence. As a young black woman, I knew that I had to go out there and not let my background define who I am. I’ve always had it in me that I wanted to become a doctor but even when I was not admitted at UCT I never gave up and that’s one thing LEAP teaches you, to never give up and just work diligently and be determined in what you do”

Nomaza went on to study a Bachelor of Science Degree at the University of Western Cape and graduated in 2013. She is currently finishing the second degree in Dietetics at the same institution. In august this year, Nomaza was awarded the prestigious Golden Key award which is conferred by the Golden Key International Society to the top 15% of each university who excel in their field of study.

I felt proud of myself and the fact that hard work gets recognised. And it’s really thanks to the support structure that I have and the fact that I know I have control of my future and I am doing something good about it. This has really motivated me to do more and gives me the opportunity to change my life for the better. ”

← Taking the madness out of matric
Our shared heritage →