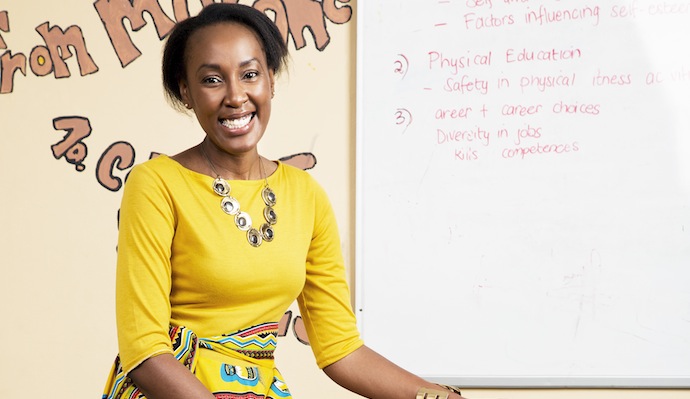 We may feel strongly about social issues, yet few of us believe we can make a difference. Here’s how Norma Young, a journalist and Vodacom Change the World Volunteer took a stand.

Taking a stand!
Leaving a comfortable and secure job to pursue one’s beliefs and make a difference to communities is considered a very brave step and even career suicide. Driven by a strong sense of community, Norma Young (32) took a leap and joined Vodacom’s Change The World Programme, which pairs up professionals who volunteer a year’s service with NPOs which are in desperate need of their help. Here’s her story:

“Last year, I quit a job I loved with the hope of making a difference. It was my grandmother who inspired my decision. She was only educated up to Grade eight, but you’d never know that from talking to her. She has a voracious desire for knowledge and read any book she comes across from Enid Blyton to Zakes Mda, even going through books I took from the school library when I was a student. Now aged 82, her brilliance is still indisputable, and because of her example, I am an advocate for education. She’s the reason why I decided to give up a wonderful job in publishing, to spend a year giving today’s youth the chance to realise their own brilliance.

After five years as a volunteer on Spirit of Youth – a Gordon Institute of Business Science (GIBS) leadership development programme for Grade 11s and 12s –  I was ready to give more than just one Saturday a month to learners. I applied for Vodacom’s Change the World programme, and got accepted for a post as Communications Officer at education NGO, LEAP Science and Maths School. I took a pay cut, relocated to Cape Town and discarded all I was familiar with such as my life and career.

My position at LEAP Science involves PR, marketing and fundraising and the days are as varied as they are pressured. Coming from a writing background, I found my stride quicker crafting student stories for our newsletter, issuing press releases for interesting school projects or coming up with marketing plans. What’s been harder than I expected is the fundraising part. For example, we were in the middle of a campaign where a philanthropic organisation agreed to match donations that were in excess of R500 000. Targeting corporates and high net worth individuals – we’ve been pitching the concept in the hopes of building a pool of new sponsors – proved to be a mammoth challenge. This year (2014) LEAP celebrates its tenth anniversary, but every decline we get from a potential funder puts the next decade in jeopardy. This makes for some bleak days. But I come back to work and try again the following day; because it’s not just funds we’re raising but the spirits, hopes and dreams of our future leaders.”

← Celebrating Our Alumni
The Learning Way →