Farewell to a great leader 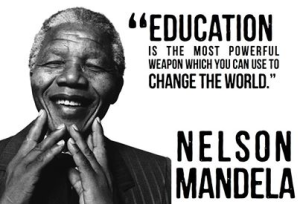 As we mourn for a great leader and servant of the people, we reflect upon the legacy left by Nelson Mandela to inspire peace, reconciliation and transformation in South Africa and beyond.

Hambe Kahle Tata Madiba, you will be missed by us all.

“It is through education that the daughter of a peasant can become a doctor, that the son of a mineworker can become the head of the mine, that a child of farm workers can become the president of a great nation.” ~ Nelson Mandela.

The following is an opinion piece written by  Sandra Bass the CEO of our partner organisation in San Franscisco, Teach with Africa.

“I was driving across the new span of the Bay Bridge peering up at the towering white spires when I heard the news that Nelson Mandela had passed. I was on my way to join teachers and education advocates in Oakland to learn about the city’s efforts to reduce suspensions among the school district’s most vulnerable students through restorative justice – a conflict resolution process based on community, compassion, and reconciliation. The room was populated with educators who had been anti-apartheid advocates in the 1980’s and later, were inspired by Mandela’s deft leadership in moving the country towards hope and healing through South Africa’s Truth and Reconciliation process. Yet another example of Madiba’s ability to inspire and ignite action across continents.

Throughout his life, Mandela believed that education was the pathway to personal and social transformation, a belief that no doubt was sharpened by the apartheid government’s efforts to systematically and brutally restrict educational opportunities for black South Africans (blanketly referred to as the “Bantu” during the apartheid era). In 1953, the apartheid regime passed the Bantu Education Act, legislation that created a strictly segregated education system that limited educational offerings for black South Africans to only those skills the regime felt a permanent labor/servant class would need to be of use to their white bosses. Hendrik Verwoerd, Minister of Native Affairs (and later Prime Minister) offered this justification for the policies “There is no place for [the Bantu] in the European community above the level of certain forms of labour … What is the use of teaching the Bantu child mathematics when it cannot use it in practice? That is quite absurd. Education must train people in accordance with their opportunities in life, according to the sphere in which they live”. Apartheid education policies fueled the freedom movement to anger and action, the Soweto uprising of 1976 where township high school students organized and rebelled against the government’s efforts to enforce language requirements being the most well-known.

Twenty years on from apartheid and the country still struggles with repairing the damage of decades of educational neglect. In 2011 only 27% of all South African youth matriculated from high school and only 11% qualified for tertiary education. A significant barrier to improving educational attainment is the shortage of trained teachers. To meet educational demands, South Africa needs approximately 25,000 new teachers a year, but each year only 10,000 teachers meet the qualifications. Teacher education systems are weak and teacher attrition rates are high, thus the country is currently unable to gain much ground in eliminating the educational inequities instituted by apartheid educational policies.  Efforts to address the educator shortage in South Africa are mounting, but collaborative, coordinated, international action to increase the pipeline of people entering the teaching profession, improve and expand teacher professional development opportunities, build teacher skills and capacity, and seed school systems with energized leaders who can institutionalize and scale change is urgently needed if South Africa is to move beyond the bonds of its past towards a more inclusive and equitable future.

As I witnessed sitting in that Oakland auditorium filled with educators, we honor Mandela’s life when we continue to walk the paths that he paved. When we choose dignity in the face of inhumanity, action in the face of fearsome yet false impossibility, and compassion over retribution, he walks with us as surely as if he was still among the living. Mandela famously said, “It always seems impossible until it’s done”. South Africa’s educational challenges are daunting, but far from impossible. And we must continue the work until it is done.”

Teach With Africa is a San Francisco based non profit organization. It’s mission is to improve access to quality education through a reciprocal exchange of teaching and learning between South African and U.S. educators.