LEAP Into the Heart of Africa 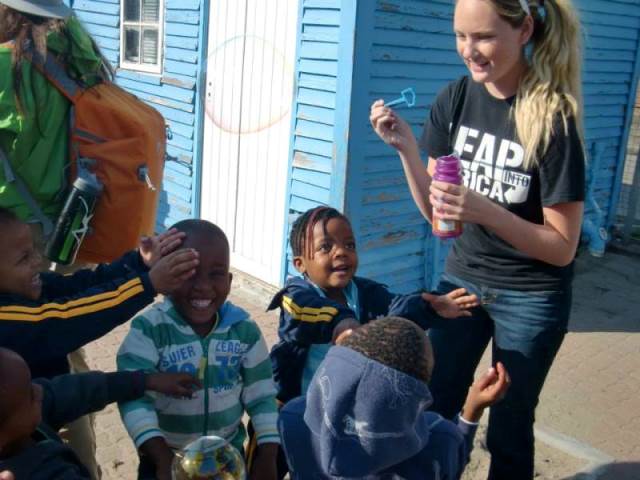 “As I endured a grueling total of 18 hours on a plane ride home from South Africa, I was finally able to digest the week long trip that eight of my peers and I just experienced. Whether it was because I was listening to the melodramatic “Angel” by Sarah McLachlan or because one’s mind has nothing better to do but reminisce during a seated 18 hours of flying, I was consumed with emotions on my journey home as I recounted my entire trip.

LEAP into Africa, a club at Hinsdale Central, has been near and dear to my heart, as well as the hearts of many other Hinsdale Central students. We spend the school year raising funds for a school in South Africa called LEAP School, as well as establishing friendships with the students there through becoming pen pals. Much time and effort is required from a dedicated member of the LEAP club during the school year, but for nine fortunate members, including myself, the duties of the club prolonged for one extra week during the summer.

After traveling for a near 24 hours, my eight peers and myself, escorted by Mrs. Kalafut, her friend Kathy, and Mrs. Pierce, journeyed to the LEAP school situated in Capetown. Once here, we each met one of the students from the school who, in the coming days, we would bond with greatly. My student, Nothuso, was kind enough to escort me to all her classes, give me a tour of her school, and inform me of South African life and culture all within the first day. One of the classes at the LEAP school was called Life Orientation, or L.O. The class began by separating the boys and girls into two groups to discuss the physical changes that the students have witnessed about their bodies from when they were younger. It was evident that all the Hinsdale students felt extremely uncomfortable while listening and being forced to share their observations. But it got worse. Eventually, the two groups combined and talked about the changes as one large group. Then, the conversation shifted to menstrual periods, sexuality, and countless other risqué topics. As the Hinsdale students fidgeted uncomfortably in their seats, the LEAP students spoke with total honesty while their peers listened and never judged. Though the class was completely unusual and would probably be deemed inappropriate in most Americans’ eyes, my peers and I admired the class and respected the bonds and trust that it created among its participants. The first day, overall, demonstrated the enthusiasm that each student had to learn, as well as their kind behavior in side and out side of the classroom.

When we weren’t at the LEAP school, we could most likely be found visiting a nearby township and meeting the people that lived there. One of the places we visited was a day care center. Here, nearly fifty children were taught songs about respecting their bodies and refusing improper treatment from other people. After spending an afternoon at the local orphanage, one of my classmaters, Jack Kengott, decided to spend the rest of the day and night at the orphanage. He said it was one of the most eye opening experiences of the entire trip and that he met the most amazing people, each with their own personal story.

Since nine teenagers from Hinsdale traveled nearly 18 hours to a foreign country, it seemed necessary to schedule some time for sight seeing of this beautiful country. South Africa is a country of undulating mountains, crystal clear waters (in which we saw a whale one morning), adorable penguins, and a wide variety of other animals. One afternoon we traveled to a cheetah reserve where we got to pet a grown cheetah. For me, a self proclaimed animal lover (more specifically, a cat lover), this was one of my favorite moments during the sight seeing portion of our trip.

Overall, this trip was completely different than I expected and was the most life changing trip that I have ever embarked on. Though my trip to South Africa only lasted a week, its memories, lessons and friendships will last forever.”