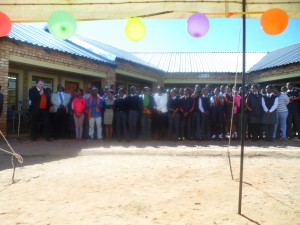 For members of the Zone 5 GaRankuwa area, Saturday June 15, 2013, was a day to celebrate the power of community. Having opened in 2012, St. Augustine’s LEAP Science & Maths School hosted an event to give parents, residents, teachers and pupils the chance to inspire and entertain one another. Though it was a Saturday, many parents and community leaders forfeited their leisure time to come to the school. Some even agreed to perform as part of the programme! Ms Monkie Boshielo, a gospel singer and parent of a LEAP student delivered energetic renditions of popular classics. She had the whole audience up and dancing and singing along with her. Each school grade also provided entertainment. This ranged from songs from the school choir to a wonderful cultural dance. Students also agreed to perform by themselves with two delivering poetry recitations, and another pair doing a spoken word piece. Founder of LEAP Science and Maths Schools, John Gilmour was the guest of honour. Grinning with joy and pride, Gilmour recounted the risks that had come with founding a new school. He spoke of the risk parents and teachers had taken in agreeing to partner with LEAP. And then elicited chuckles from the audience as he breathed a sigh of relief and said the risk was now over because the school is running smoothly and has many happy learners. By the time lunch was served, the mood was jovial and the community had a glimpse of just how amazing our LEAP future leaders really are.