In the days of high-speed internet, mobile phones and instant everything, the concept of ‘work ethic’ may seem a little old-fashioned. In fact, putting a positive moral value on doing a good job is a relatively recent development in human history, beginning with the Protestant Reformation in the 16th Century.[1]  Before then, like your average teen today, work was seen as a bit of a curse. We spoke to instructional developer, Glenn Bunger, to find out how to make work cool again.

“A big part of what you are is how you work,” says Glenn Bunger, the new instructional developer for all the LEAP schools and a teacher with 10 years’ experience. Glenn moved to South Africa in September from New York where he was one of the head professional developers for the city of New York.

You want your students to succeed at something they will spend a big part of their life doing. For most, work will take up a third of their lives. And if you don’t enjoy your work, you can at least enjoy doing it well – doing something well is part of the reward.” 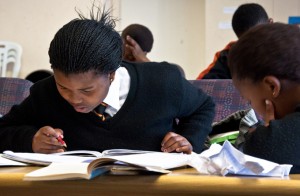 And here lies the key: hard work and discipline contribute more to success than innate ability. In The Secrets to Raising Smart Children Carol Dweck looked at more than 30 years of research and found that a focus on effort—not on intelligence or ability—is the key to success in school and later life.

Dweck argues that an overemphasis on intellect or talent – and the implication that these traits are innate and fixed – leaves people vulnerable to failure, fearful of challenges and unmotivated to learn. Rather than telling children how clever and talented they are, we should be praising their effort and persistence. This, says Dweck, creates a ‘growth mind-set’ and teaches children about the brain as a learning machine.

Genius for a day

Glenn, who is also co-teaching maths at LEAP schools, says: “I praise my kids in the classroom for doing work well. I have this thing called ‘Genius of the Day’. In a maths classroom, kids are trained to think that there is only one answer and that when you’re wrong, you’re wrong.”

“I try not to say anything is wrong. In fact, my ‘Genius of the Day’ is almost always someone who got it wrong. But they did something interesting, took a chance and in that process learned something that taught the whole class.”

Discoveries in neuroscience are shedding new light on the idea of the growing mind. Until very recently, the brain was considered to be ‘hard-wired’ by the end of early childhood. Now, there is increasing evidence that the brain is a highly adaptable structure that undergoes constant change throughout life. This ‘neuroplasticity’ has enormous implications for education but, more importantly, proves that fostering a good work ethic in children can fundamentally change the physical structure of their brains and the future path of their lives.

“My tip for teachers is to save the big praise for the big deeds,” continues Glenn in the same vein. “In my classes I continually reference the LEAP Code, stressing that students should admit mistakes and learn from their mistakes. Even when there’s a challenge, there’s an opportunity for growth.”

Without even realising it, the LEAP Values have been promoting the ‘growth mind-set’ that Carol Dweck says will make children more successful in life. “Work hard, work well and be open to change,” are things that Glenn believes can help students achieve great things.

If you hear something enough you start to believe it.”

So how do parents and teachers build an appreciation of working hard and doing things well? The consensus seems to be: