August was a month to look back and reflect on women’s contribution to the struggle for democracy. But it was also a time to think about what education means to the women of South Africa today. These are the voices and images of the women of the LEAP community, in celebration of Women’s Month. 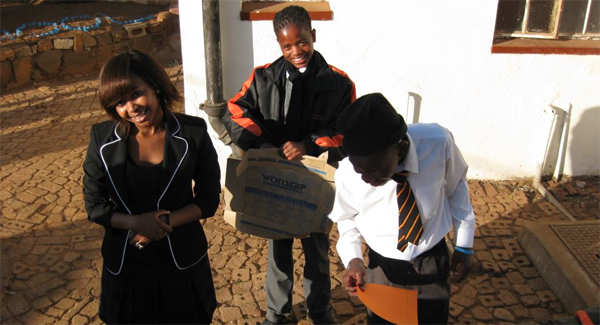 Asanda Sigigaba (left) at LEAP 5 in Limpopo doing a General Studies class project with learners about courageous women. One girl wrote her essay about Asanda as the “courageous woman” in her life.

Participation
Tuksie Nkwinti, Leader of Leaders for LEAP 2 (Gugulethu) believes that having full participation in communities and government structures is important for women today.  She writes: “To be acknowledged and recognized as women, earning respect and dignity through achieving and serving as an inspiration to those who are still growing.”

“Being a woman in South Africa means having a voice, being heard, and being able to do what most Western countries dream of achieving: having a family, a career and leading a balanced and fruitful life,” agrees Fadia Williams, Principal of LEAP 3 (Alexandra).

I wouldn’t want to be a woman in any other country!

Access
Raising the important issue of access to health resources for women – specifically HIV/AIDS and TB, breast cancer and abortion – Tuksie says: “Emphasis should be placed on eradicating abuse and rape.”

“It is through education that we can develop and transform our communities.” – Zintle Mpayipheli, LEAP past student and Future Leader

Becoming powerful
“South African women to me are amongst the most beautiful in the world, accompanied by their self-pride and confidence,” says Heidi Gie, LEAP HR Administration and Payroll.

“For me personally, [education] means I am able to expand my potential and grow. But more importantly, it is allowing me to give my daughter a solid foundation to become powerful in her own right and use her knowledge and intelligence as a gift to excel.”

Foundation for a better world
Sabrina Lee, LEAP’s External Relations Officer believes that education is the foundation of a better world. “It is the most important tool we have to understand ourselves and the world we live in. It broadens our minds; it ignites our imaginations and drives our ideas and passions.”

“For me education means freedom,” says External Relations Manager, Kirstin O’Sullivan. “The freedom to make informed decisions and to choose how I live my life. As someone who has had these opportunities, I want to play a role in ensuring that all South Africa’s youth have the same freedom by having access to quality education.”

Knowledge Manager, Penny Lorimer , agrees: “If everyone involved in education – teachers, students, parents – across communities can find ways to build relationships, collaborate openly around best educational practices and truly share their strengths, all our children will have access to a spiritually (and materially) sustainable future.”

This woman
A poem by Avuyile Maseko, LEAP graduate

She protects.
Knowing how vulnerable she is
Whipped by life
Yet she acts like the egg shell that is prepared to shatter just for the yolk to look brighter.
Already cracked but she refuses to give up

She nurtures.
She gazes the world searching for qualities needed to survive
Strategy upon another she gives principles to a child
See, she didn’t stand the world herself otherwise
She would reign like Nelson Mandela who got the world addicted to his actions of sacrifice
Overseeing opportunities that she will not cherish
She provides the best opportunity to ride on to the child

She believes.
Men admire her for what she could do in the next room
She believes she could do better in the next world
She knows she’s capable of developing immature thoughts of a man to faith
She listens to the deep beating of ones tongue
Only when the tongue beats simultaneously with the heart

This woman
Failed a couple of times; she lost count
Those she raised she still counts
To go on she looks to her children
Not because she embraces what she gave them
Because she admires how they have kept going

This woman
She protects, she smiles, she believes, she nurtures
She loves unconditionally
(I fail to describe her love)

← From subject to citizen
Amy inspires as LEAP Patron →