Extract from an article by Celia W. Dugger in the New York Times, 9 September 2010 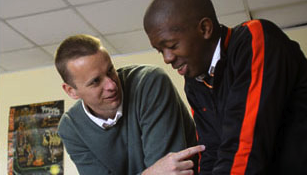 Gcobani Mndini, a shy, lanky 17-year-old, said he was already a gangster by the time he started grade nine. His small gang, which called itself the Tomatoes, was robbing people, fighting over girls and getting high on Jack Daniel’s and marijuana.

“I joined the gang because I wanted to belong,” he said.
He has since found that he fits in the last place he might have expected — at a private high school that is reinventing education for teenagers from South Africa’s black townships. Gcobani quit gang life and has emerged as a talented science student seeking admission to the country’s finest universities. to belong,” he said.

As many of South Africa’s public schools have failed a post-apartheid generation of children from poor townships and rural areas, a budding movement of educators, philanthropists and desperate parents is increasingly searching for alternatives. New private schools are springing up to serve poor and working-class black children, giving the still dominant public system some newfound competition and perhaps even devising models that will end up influencing it.

At the LEAP schools, students have extended classes during the week, from 8:15 am to 5:15 pm, and they attend on Saturday mornings. They spend extra time on maths, science and English. Seniors preparing for the matriculation examinations that will shape their futures stay until 8 pm three nights a week.

But the schools instil more than a fierce work ethic. Each day, students have a life orientation class, where they talk about the personal problems that can derail an education — a stepfather who expects a girl to clean house rather than do her homework, a student trying to study in the shack where her family lives and runs a shebeen, and another student who goes to school hungry because her mother’s salary as a domestic worker runs out before the end of the month.

After a year of denying that he was in a gang, Gcobani said it was only in life orientation that he began facing the consequences of his choices.”

The one-two punch of academic rigor and emotional honesty has paid off. LEAP students have far outperformed the national average on matriculation exams.

Gcobani’s first class of the day is his favourite. This is his third year taking science from Ross Hill, the son of an Anglican pastor and a high school biology teacher.  When Gcobani first stepped into class, Mr Hill said he knew of the boy’s reputation and braced for a fight, but there was none. “He loves science,” Mr Hill said.