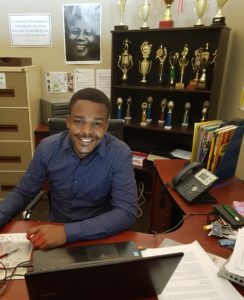 James Malope, the leader of the Aveng-sponsored LEAP 4 School in Diepsloot, has an inspiring story to share about his journey to success. James grew up in Honeydew, Johannesburg with his mother in a single-parent household. He attended Kingsway Primary School in Randpark Ridge. With the help of Pastor Mzwakhe Elias Khambule, a father-figure in his life, he was fortunate to attend high school at Cornerstone College, an independent school in Pretoria, on a scholarship.

While at Cornerstone, like many children from disadvantaged backgrounds, James became rebellious. He was introduced to Anthony Farr, CEO of the Allan Gray Orbis Foundation, who offered him an opportunity to join LEAP 1 in Cape Town where he completed his Grade 12 in 2007. James went on to study at the University of the Western Cape where he graduated with a Bachelor of Education in 2011 and joined the LEAP 4 School in Diepsloot as an English and life orientation teacher. It was here that he was afforded the opportunity to travel to America on a one-month exchange programme where he was exposed to different teaching methods.

“My experience as a learner at LEAP 1 and my understanding of the programme stood me in good stead to make a difference in the lives of LEAP 4 learners from the community of Diepsloot,” says James.

After two years as an educator, in 2013 James took on the position of Instructional Leader at LEAP 4 where he became part of the management team. He worked closely with the former leader of the school, Paul Mumba, and developed close relationships with the parents, officials from the Gauteng Department of Education and various funders. He was also the head of humanities and managed LEAP trainee teachers working at LEAP 4.

With the news that Paul Mumba was planning to return to his home country, James was identified as a strong candidate to take over his role and was appointed as acting leader at LEAP in January 2017. He worked alongside Paul for six months until June 2017, whereafter James assumed the full role of school leader.

James is passionate about helping youth in disadvantaged communities realise their potential. He continues to share his journey with others in the hope that it will inspire them to strive for bigger and better things, no matter their circumstances. “Young people often just need someone to believe in them, as I was fortunate to have when I joined LEAP,” says James. Most recently he has given motivational talks at his alma mater, Kingsway Primary School, and at Dainfern College where he focused on the importance of education and encouraged learners to believe in themselves, their abilities and to strive for excellence.

“My immediate plans are to ensure that the LEAP 4 School continues to run optimally and to play an influential role in the positive development of learners at the school,” adds James.

With James as school leader, we expect to see many inspiring future leaders graduate from LEAP 4. 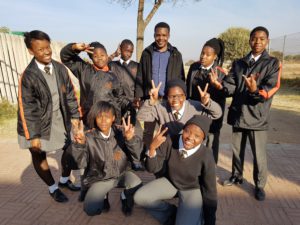