Caring for More Than Yourself 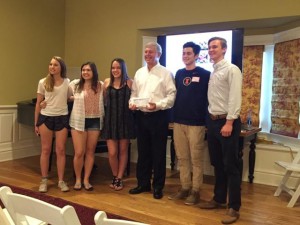 Presentation of a generous cheque by the Hinsdale LEAP INTO AFRICA Club, Chicago, May 2016

In 2007, from a chance connection through an ex-South African living in Chicago a group of students at the Hinsdale Central High School learned about LEAP Science and Maths Schools and their students. They were inspired to form a club called LEAP INTO AFRICA which was managed by a committed teacher, Pam Kalafut and supported by similarly enthusiastic parents. The primary purpose of this club was (and still is) to raise funds for the LEAP schools, and when a group of both students and parents travelled to Cape Town in August of that first year they brought with them a cheque for $8 000!

Thanks to the investment of large amounts of time and effort, the LEAP INTO AFRICA club has grown from strength to strength ever since. The members undertake a wide range of creative fundraising activities, including hosting dances, auctions, competitions of all kinds, even selling bacon!  A generous total of $41 000 has been raised over the past 8 years — a meaningful achievement.

In May 2016, at a wonderful event hosted in Chicago by Tom and Judy Casten the LEAP INTO AFRICA club members presented a further $16,000 cheque to LEAP Founding Chairman, Anthony Galloway. A number of other supporters also gave contributions and the final amount was matched by the Casten Family Foundation. LEAP was delighted to receive a generous donation of $38,600!

It is said that true generosity is giving without any expectation of return, and the LEAP INTO AFRICA club embodies this true spirit. Long may this relationship continue to grow and flourish into the future and we hope to host club members back at LEAP one day.