“We learnt that it’s not about where we are from, but about being young black African kids making a difference in our communities”. 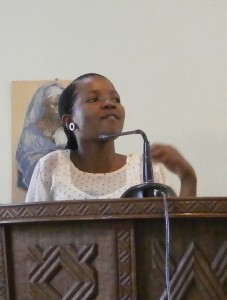 Tumeko Mshuqwana, is a 21 year-old Future Leader (Teacher in Training) at LEAP 4 (Diepsloot) and  a previous student of LEAP 3 (Alexandra).

She recently had the opportunity to travel to the Democratic Republic of the Congo to present on the issue of young people’s participation in governance at the University of Peace hosted by MJDD (Youth Movement for Dignity and Development) conference. This was amidst the xenophobic attacks which were tearing through her own community of Alexandra in Johannesburg where she still lives.

How did you get the opportunity to speak at the conference?

Zonke Mpotulo (Graduate of the Future Leaders Programme, previous LEAP 1 student and Relationship Leader at LEAP 6 Ga Rankuwa) spoke at the conference last year and was approached to speak again in 2015. Zonke thought it would be better to pass the opportunity to an existing ‘Future Leader’ and I was the one who got the opportunity.

What was the theme of the conference?

The conference was about making our differences a force for peace rather than violence and misunderstanding. It was ironic because the conference took place as the xenophobic attacks in South Africa were re-emerging, and particularly in Alex, where I am from. It was a chance to talk about youth involvement and youth leadership, governance and how young people can take a role in that.

What did you speak about at the conference?

My presentation was about governance in South Africa and how young people contribute. Before I spoke I wasn’t sure of what people would be interested to hear and what they wanted to learn, but after getting to know the delegates from DRC, Kenya, Zambia, Jamaica, USA and other countries I got a better idea and could adjust my presentation. We were all hoping to learn what works and what doesn’t in different contexts – how to get young people involved.

What were your main lessons from the conference?

I realised that here in South Africa people have a voice, we are allowed to say whatever we want, people don’t have to fight for freedom of expression. We have platforms to voice our concerns but young people are not using them. I also learnt the power of listening to others and being open and honest and trusting the process.

How did you feel about being in the DRC while at home African nationals were being persecuted and attacked?

At first I felt vulnerable but, because of the conversations we were having, I became comfortable in the space. We learnt that it’s not about where we are from, but about being young black African kids making a difference in our communities.

The xenophobia was shocking and it’s always hard to understand. People want to blame other people because they struggle to face their own issues. Some important conversations need to be had, and we need to make them happen.

What are the main lessons to emerge from the conference?

Young people are a powerful force for change. We should be united and support each other. We should also be willing to take risks and have the difficult conversations which are necessary. Young people need to be the first to make huge change and influence others to join these movements.  We are going to be the ones to make change happen.