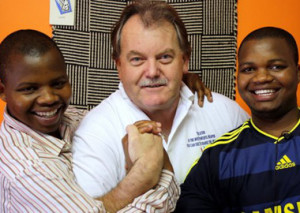 It has taken many years to realize the extent of the damage done by apartheid – this is reflected particularly in the way that children are marginalised simply by where they live and the practical disabling realities of a country with the most extreme inequities in the world. And we still live with the effects of apartheid that has created such poor examples of schooling, of how learning and teaching happen and of school leadership.

The joy of the new

When we started the first LEAP school serving Langa in 2004, we had to let go of assumptions around the way children learn and let go of the notion that the way we were doing things was working. This allowed us to move joyously into a new school where we were consciously going to do things differently. We ran our first school as a collective – we handed over responsibility to the children themselves and they responded magnificently.

What I remember in particular was the sheer joy of the singing, the music, the dance and the drums that became part of the daily ritual at LEAP. Very quickly, LEAP students found expression in so many ways with the joy and the pain reflected in music and dance.

The children responded very positively to the long day and quickly described LEAP as a family, as a home. We extended the invitation and the children grabbed it – their voices were heard quickly. We started LEAP 1 with no capital expenditure, only donations, and yet we had a fully equipped office from the first day. We had an open house celebration after four months for all the people who had donated things – from chairs to staplers. It was planned and run entirely by the young people and their gratitude and understanding came pouring out.

The emotional journey has always been challenging. I have said to many teachers: “Your relationship with a child only really begins when they are angry with you.” Fear makes children compliant and compliance is counter-productive, developing a submissive consciousness. When a young person says “I don’t even like you,” it is then that you know they may be beginning to trust you.

Teachers in South Africa have been trained and operated in a hierarchical system which created the concept of teacher as the intellectual – a “master”. We need teachers as technicians, facilitators who can unlock, trigger and create the opportunities for self-learning. So the creation of our own corps of teachers became a high priority. Now we have the Future Leaders Programme and the TWA Global Teacher Institute and every LEAP school employs at least two LEAP graduates.

A great joy for me is that young people are choosing to become teachers. They realise that the greatest platform for change in our country is education.

Our original vision was that community change can only come through personal change and the way LEAP students have taken ownership of becoming agents of change in their communities has been quite amazing. We set out to take these children to and through university. What began as a trickle has become a flow and we now have over 30 university graduates. This year, we have our first physiotherapist, our first engineering graduates, our first honours graduates, our first masters student and graduates working at blue chip financial services firms. Our hope now is that this flow becomes a flood.

But the key achievement of LEAP has been that even when students don’t do particularly well, they stick at it. Very few drop out of study journeys completely, some change direction or find other ways to get things done, but most work hard to finish.

LEAP’s journey over the past 10 years has not been a heroic struggle but a collaborative enterprise – hard work by a collective who consciously lowered the barriers to innovation and collaboration. When you do this, amazing things happen.

The real success is going to be in how the learning of LEAP can continue to be shared and impact more broadly on education in South Africa.

← Boffins for Africa
Sisters are doing it for each other →