Once all the stress of writing and passing Matric is over, then what? We caught up with a few LEAP graduates to find out how they are finding life after LEAP and what advice they have for the Class of 2013. 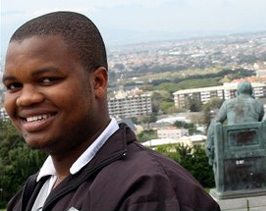 Akhona Krakri matriculated in 2008 and started a Bachelor of Commerce in Accounting at the University of Cape Town before changing to Information Systems. “Basically, the life choices I made changed my work ethic and time management which affected my results in the end,” he reflects.

I had to regroup, restructure my life and look at other possible career prospects. But I am very glad to be on this path now as it promises to open other paths that I did not think possible at all.”

He now works at KPMG Services as an investigative assistant in the forensic technology business unit. “Basically, we use technology to analyse, recover and trace data in all sources of media which became very relevant to the degree I completed in December 2012.”

“LEAP prepares you very well for the environment you get to live in at university,” continues Akhona. “But then while you’re at high school, you do not realise how important it is for you to listen, take the advice and all the information you get until you get in to varsity and find yourself trapped in those situations. This relates mostly to life style choices and decisions you make in general.”

“The transition itself can be very hard because at varsity, you become independent and there’s no one to track your progress regularly – especially if you do not have support structures and good networks around you.”

Akhona’s advice to get to and through university is: “Hard work, good choices and perseverance are at the heart of everything as you journey on from here. These open great opportunities and the more you network with people, the more doors will open.”

And when things become hard, you must ALWAYS REMEMBER that ‘strives and struggles precede success, even in the dictionary’.”

Akhona wants to enroll for the Certified Internal Controls Auditor exams and start studying for his Honours in Information Systems in two years’ time. This, and hard work of course, will no doubt get him into the managerial position he aspires to.

Partson Shamase from Alexandra finished Matric in 2011 and was accepted at WITS to do Accounting Science. “It was difficult at first,” he says quietly, “especially my first semester.”

“But I was able to adjust and everything worked from there. It’s great now, I like it a lot. And I passed all my exams!” Partson has three more years of study, followed by three years’ articles. “After I graduate, I want to work for a few years and then I want to open my own business.”

“I would say to the Class of 2013 that they must work hard on the subjects they know that they can do well in, they will get more points and be able to get into the course that they want. For me, maths and English were very important.”

Partson also has some sound advice for Grade 11s:

Work hard this year as you use Grade 11 marks to apply for bursaries for your first year. It is very sad to get accepted to a university and not have the funds to go.”

Eighteen-year old Avuyile Maseko from Gugulethu is doing a BCom Accounting at UCT. Like Partson, she found it difficult at first: “I wasn’t used to the environment, with a lot of people that you don’t know. At LEAP we were very close and I found it difficult to make new friends. I thought I would never make close friends like I had at LEAP but I’ve managed.”

“With the work, LEAP helped me a lot because from attending lessons from eight to five and doing my own homework and chores at home, I was used to going to bed late and working hard.”

Avuyile’s advice to this year’s Matrics is:

When she finishes her degree in 2014, Avuyile wants to work and perhaps tutor other young people but her dream is to “start a charity organisation to teach our students and mentor them.”