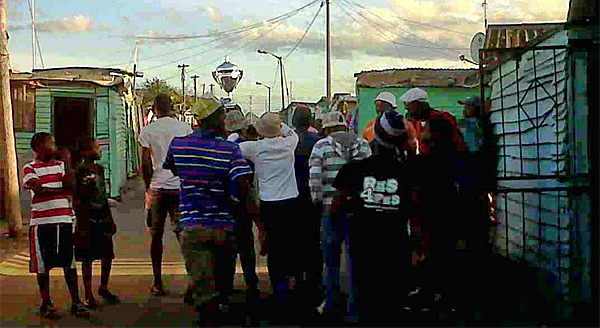 As the Peace Lovers FC under 15 team hold their Champion’s League trophy aloft above the back yard shacks of Langa, founder Andisani Tsengiwe can barely believe how far they have come since the club was started in 2006 by two young residents who recognised a need to engage youth at risk with something they loved – football. Andisani, a LEAP past pupil and student teacher, and Sibusiso Pakade saw the young people around them getting involved in drugs, gangs and violence and knew they had to do something to break the cycle.

“Football helps them to engage less in such issues and focus on football and the beautiful game,” writes Andisani. The club now boasts around 220 players and, together with partners Garlandale and Tygerberg football clubs, more than 350 young people are part of the Peace Lovers story.

The under 15 team of this tiny club, run on a shoe-string by passionate young people, managed to beat giants Ajax Cape Town and Engen Santos to win the Champion’s League – Cape Town tournament. It is quite an achievement.

Life skills
But it’s more than just football and trophies. Peace Lovers teaches boys and young men vital life skills through soccer.  “All our players take part in a life skills programme every Friday afternoon and during holidays,” continues Andisani. “The programme is based on the same principles used in LEAP Science and Maths School life orientation programme. We recently partnered with Sonke Gender Justice Network to add strength to the HIV/AIDS and gender issues and some other components.”

No support
Soccer is a multi-million dollar global industry, where top-flight players earn more in an hour than most residents of Langa earn in a year.  For talented youngsters, it is a dream profession and a pathway out of poverty to untold fame and wealth. But despite the national euphoria during the 2010 FIFA World Cup, South Africa still has little infrastructure and support for football in the communities that are most passionate about the game. “This results in many young potential stars being unable to pursue their soccer talent. Many clubs, teams and players simply can’t enjoy the beautiful game,” comments Andisani.

United
Peace Lovers Football Club’s partnership with Garlandale and FC Tygerberg aims to change this. “Very little help is offered by local bodies in respect of infrastructure, financial or administrative support,” explains Andisani. “Our clubs have merged as a direct result of the help we need from each other. It is hoped that we can help each other and share resources so that all three grow, develop and emerge stronger.”

“Already the partnership has helped all three clubs to overcome race issues – Garlandale’s players are predominantly coloured and Tygerberg’s players are mostly white while all the Peace Lovers FC players are black and live in Langa. This partnership is helping players form friendships that would otherwise not be possible.”

Become a supporter
The club has a tiny budget and relies on donations and in-kind support. Their biggest cost is transport to games. If you want to become a Peace Lovers FC supporter and help the young men of Langa choose a different path, contact Andisani on 071 960 9673 or email atsengiwe@leapschool.org.za.

← Great LEAP forward
A day in the life →